School Buses - all shapes and sizes

I just recently received an comical email about the comparison of a School bus in Japan against school bus in Pakistan. 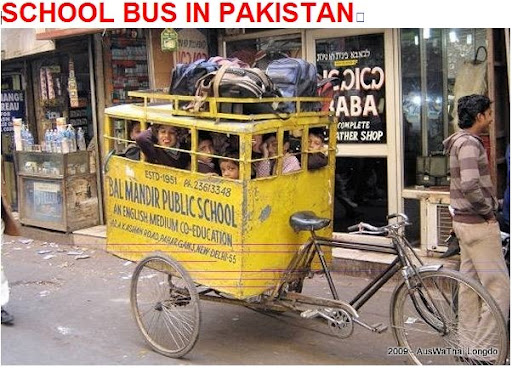 There was no comment in the email the picture said enough.... ha ha ha WOW for Japan and WOW for Pakistan.. that is I mean "WOW" (excitment and surprise) and conversley "WOW" as in (pity and sadness) for Pakistan .. Maybe I should have spelt "wow" as "woe" but then if your not familiar with spelling (silly english language .. I mean is it skool or school) i guess it helps if we have some tone in our spoken word .......... and that would help support the "wow" or "woe"

That reminds me I just got through acknowledging to a Thai friend that Thai Language is not so difficult ..Talking lagnuage ... in Thai (which is a tonial language) the english phonetic does not laways help, example: "Glai" and "Glai" (means either close or far) and "Maa" (means come or dog or Horse) all because of the change in tone (Thai Language is 5 tones) so what about english there are lots of words that cause confusion to a foreigner but not us, just ask a foreigner and you'll be surprised at same of their fears and frustrations.. try explaining to a foreigner your going to "a wake" ... does that mean your coming out of a sleep or going into one (a long one) and when I say "one" I hope the foreigner did not think you had victory, because they heard "won" not "one".


Anyway back to the Buses
After the "wow" factor I thought ok somone has had a nice giggle as taking the Mickey or taken the piss (now try explaining the slang to a foreigner).. Or, was someone trying to "Bag out" Pakistan (a disgruntled cricket fan) ... who knows perhaps the email has been circulating for the last 12 months and now it's landed in my inbox. These things fly around .. I used to delighted to receive email news flashes from friends and promptly felt the need to forward to all my friends, until the day a few emailed saying "idiot" it's a fake or "that's 6 months old" etc.,

Now, unless I know it's unique I don't send them, we have enough media outlets pumping news. I do however almost always send on anything that has a positive aspect.

It was probably an important news article about the new technology coming out of Japan in temrs of a proto type for .... (here I can make up a story).. as they say "don't let the truth get inthe way ofa good story" ..... nar what I was thinking about was why the email proposing extreme difference in Bus services .... and I concluded it was some Aussie having some fun.. thats what a lot fo us do, well it seems that was cause i get so many of these emails from Aussie mates....

Talking about "Never let the truth get in the way of a good story" how about the media hype about the "Bar Mat" fiasco in Thailand a few months back....

The Australian Lady Based on the read of the media it seemed she was completly inncocent and certain people in Thailand were hell bent on keeping her captive for ... for ... for ? for what

why on earth would a Country that is known for it's passive friendly nature, in a time when their most important tourism is suffering suddenly go all out and cause international headlines....

The very reason they pursued the matter was about respect and politeness which is the cornerstone of their culture and of course keeping the tourists Industry flowing.
Apparently the trouble maker "Bar Mat" has been exciled ... http://auswathai-sawasdee.blogspot.com/2009/06/thailand-bar-mat-has-been-moved-to.html

well I guess it's not surprise

an this one is a cracker