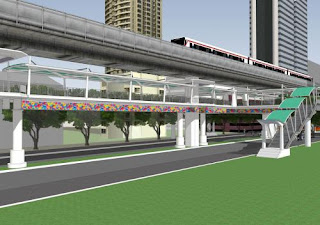 The pledge from Bangkok Metropolitan Administration (BMA) to spend Bt15 billion on building the Super Skywalk System, a 50-kilometre clutter-free elevated walking space. Pedestrians will be able to enjoy greater convenience and safety.

This will offer a another value added attraction for Tourism making is more convenient for visitors to move efficiently through city zone. Pedestrians will not have to worry about sun or rain, as the skywalk will be covered and close-circuit television and adequate lighting will also ensure safety.

The first phase of the walkway would cover 16km and construction would begin next month at a budget of Bt5.2 billion. The walkway will go down Sukhumvit Road, starting at Soi Nana and ending at Soi Bearing. This phase will also include some parts of Phya Thai, Ramkhamhaeng and Wong Wien Yai.
The second phase will be 32km long and cover Ratchadamri, Silom, Sathorn, Phetchaburi, Ramkhamhaeng, Ekamai, Thonglor, Phaholyothin, Thon Buri and the Bang Wa areas.

Image via Wikipedia "It will help Bangkok residents move around more easily in crowded areas," Governor MR Sukhumbhand Paribratra said yesterday. BMA said the Super Skywalk System would be an integrated project that addresses the needs of pedestrians on a long-term basis.

Space for pedestrians is the only issue that has not been seriously addressed to meet the growing density of buildings in the past decade. "During the past10 years, walking areas have covered just a kilometre and half," Sukhumbhand said.

The Super Skywalk project is part of Sukhumbhand's "Krungthep Gao-na" campaign.
The walkway will be linked to the mass transit system, such as the BTS and the subway, Sukhumbhand hopes people would be encouraged to leave their cars at home. The construction is scheduled for completion in four years. 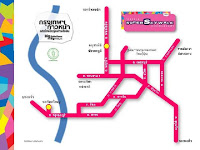 The BTS skytrain system is a significant attrtibute for Tourism Bangkok. "It's one of the very 1st aspects of our Induction for Tour guests, quotes Phill Smith of Exec Tours Bangkok".  We include the BTS skytrain map in our Guest arrival. We want our guests to be over confident to use the BTS and MRT (underground train) to avoid the unpleasant experience of being caught in peak traffic which at times causes Grid locks.

"We include a ride on the BTS in our Orientation program for guests, they quickly appreciate the efficiency of the BTS, we also point out that many of  the stations have skywalks which offer a fast bypass of the foot traffic on the streets".
The BTS is an intrigual element in Bangkoks "Amazing Race" a fantastic "Team Building Challenge" conceived by the highly reputated team building group  "Excel Solutions Asia", Bangkok.  The game comrpises a serious of challenges in and around the Siam, the BTS is used as the primary method of transport to and from various locations where challenges must be completed based on a set of rules, budget and timeframe.

Our feedback from our tour guests is once they have had the rush of the challenge and pushed outside their comfort zone they are overly confident to tour many locations in and around Bangkok using the skytrain.