Friends Barber Massage and working the cogs for happiness


Their gang has a hip hop shop welcoming tourist from around the world, you'll get the best service for Thai massage and request to donate a smile a token amount to the Charity Money Box


9000baht raised with thanks from friends and customers, all proceeds are presented during a visit to FSCC Foundation Slum Child Care AND we welcome you to join us for a visit... its fun

If your touring to Bangkok you should have this on your radar, book a date with the girls for a massage and a visit to the child care centre and bring your birthday cake to share with the kids... it's a hoot of an experience.   The centre is located in Klong Toei which offers loads of Grass roots tourism.

ALL funds go to the foundation, you may donate through us or direct, refer website

The bar offers an open space facing the street with eminent music every day in night. The local bands perform in the bar consist of four Filipino women, and a lovely guitarist and a guitarist who keeps on rocking the bar with fabulous music.

It is the perfect place for newly wedded couples and singles looking for a romantic hangout in the night. The bar offers the opportunity for dancing, entertainment and lots of music every night. The bar has very awesome serving of food and a wide range of menu to give the best food to the visitors. The food is delicious as well as amazingly cheap that gives easy access to the tourists if they like to travel to Bangkok.

The Check Inn 99 holds a series of events during the whole week but attracts a large number of people for the night gathering. It offers the perfect atmosphere, beautiful place for dinner, wonderful meals and a get together for the people in the night. It’s a great fun and entertainment to spend an evening outside the home.

The music keeps on changing day to day, which makes you move on the floor with your partners. The Check Inn 99 hosts many events and makes your day with amazing food and music. If you are arranging a birthday party or holding an official meeting, it is a perfect place to check it and enlighten your event with full of fun and entertainment.


It makes a perfect hangout for singles and adults to enjoy Jazz event and melodious music in the night. Lots of visitors travel to Check Inn 99 from different parts of the world. It is located in the center of the Bangkok, and there are lots of ways to enter the Check Inn 99.

The dancing girls at Check Inn 99 keep on shaking their bellies on the melodious tones for the amusement of the visitors. It also gives you the opportunity to sing a song for your loved ones, and you can dedicate any songs to a family member or friend on request to the band.

The bar has trained and talented staff to provide you quality food as well as the service to enjoy the surroundings in the night with music.

We were dressed casual and threw ourselves into the mix, well actually they were auto drive and I was quickly consumed by the Thai social culture (a few drinks, food and music and away you go – the genuine smiles creates a happy fever and it’s so contagious).

In 2010 I visited again, this time in formal clobber after an AustCham members Sundowner. Our surviving group of 4 decided on a “roadie”, our Thai team delivered us here and we protested that our formal attire was not in sync (cultural difference).. we had a great time absorbing the happy fever!

I’m reminded "T.I.T." (This is Thailand) as long you smile and show politeness your welcome from anywhere and dressed in anything!  (but be polite).

The backing band is large the range of music took us from 'sipping ripple wine down in the lightnin' bar' to a Thai country style tune. The various singers were all talented with good strong voices that suited the style of music they performed. The girls wore tiny skirts and showed enough bare waist and navel to be considered on the cutting edge of modern.

Patrons
Mainly conservative middle class audience fill the cavernous room, the younger guys had the right haircuts (look like Japanese cartoon characters) whereas the Thai folk and morlam singers looked either like poor or successful country bumpkins. Make no mistake: this was a good show. The delivery was akin to being in the ring with Mike Tyson in his prime, but without the risk of having your ear bitten off.

Entertainment
The audience was not allowed a moments rest and the amount of dunkels being downed did their bit to contribute to the party atmosphere. The Thais know how to enjoy their music, actually any music just the loud sound and seeing anyone smile is enough to get them jigging and it’s most contagious. The girls have an outstanding ability to be innocent yet so sassy in their dance moves, I'm not so sure if some parents would approve. Despite the slight disappointment in the not so authentic German taste of the viands and brew, I had a blast watching the people genuinely having inspired fun and could not help but laugh in wonder at the play list and the way it was put together. If you want to impress look no further for dinner and entertainment under one roof.

The centre room is bulked with Tables and the wing area is 2 storey all having good view onto the stage show which never ends. The night engulfs you and everyone us standing at their table jigging along to their favourite tune or they wonder to the narrow dance area in front the stage to dance more or offer rewards to the entertainers (free drinks).


Food may be an afterthought to the 40,000 liters of lager and other beers brewed here each month, but the kitchen turns out decent Thai food, with some German and Chinese fare thrown in for good measure.

The taproom (which is really why you should come) especially boisterous when the Band is performing its fusion of Thai and Western music. On nights that the band's not playing, local singers perform Thai and Western favorites. Established 1999, Tawandang is a large venue and you guessed it: is very popular with the locals due primarily to the right kind of entertainment. There are three types of beer brewed on the premises, Lager, Dunkel and Weizen. They are available in containers that range from 0.33L to 5L.

Beergarden Soi 7 is for the Fishermen

Known by the faithfulls as the Shed, otherwise better known as the Beer Garden Soi 7, Sukhumvit Bangkok

It's just a big old Barn (shed) with a big Bar and plain and simple functions.

Everyone now and then the place goes special with Thai dancers and costumes, otherwise it's a non intrusive unconditional simple down to earth casual Bar where there is lots of beers and lots of guys and girls hanging out.

The location is pretty well smack in the middle of nightlife zone Sukhumvit, within a few hundred metres you can enjoy family theme or adult only (mature age)

They have honest low price beers and food and will accept you in shorts and thongs or suit and Tie, if your consuming they're serving

As for the comment about Fishermen that should cover the story about the "one that got away" which should not happen to often otherwise you need to tweak your jig.

Frequented by the expats and regular tourists mainly – and that's an indication of the sustained quality and value.

It is probably the best place to watch sport seriously in all of Bangkok with 11 screens available in a small area, and 4 sound zones.


The location is as good as it gets – close to BTS Asoke, MRT Sukhumvit,  50 metres off Sukhumvit Rd and 50 metres from the major nightlife area known as Soi Cowboy. Office buildings, Shopping centres and a range of hotels are all close by. But the best part is the food and value drinks.

The Steaks are amazing, the Thai food a step above the street, and then a range of Italian, Pizza, Seafood, Lamb, Pork and snack dishes all served in Western (Aussie) style in large serves. Drop in and chat with friendly customers and staff – the way a local bar should be! 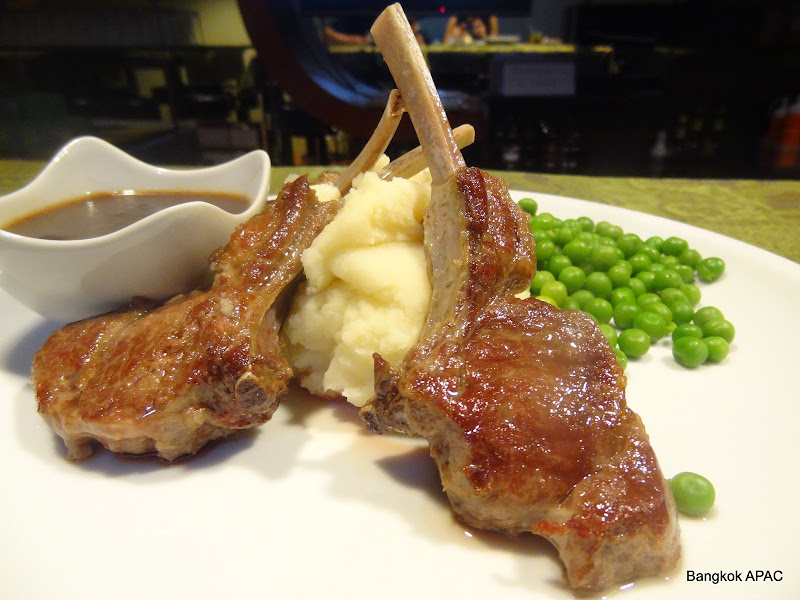 TIP: Bangkok Tales and Street Savvy
as for owner / manager Andrew and find out more.....

"CHECK in at Social media: BRADMANS "

Benjakatti, Park, Lake, Garden and and and

A walkway that attracts a fair number of joggers every morning and early evening stretches for two kilometres around the lake. Unlike at Lumpini — where bicycles, walkers, joggers, aerobics dancers and blissfully unaware three-year-olds on scooters all vie for space — Benjakiti boasts a separated bicycle lane that makes it possible to cycle as fast as you like with little interference. Bikes of all sizes can be rented for 40 baht per one hour. Although the city’s “green lung” to the south is a must for cycling enthusiasts, you won’t find a better place in central Bangkok to ride than Benjakiti.

Impressive views over the flower-lined lake would probably be enough to win Benjakiti the prize of Bangkok’s prettiest park, but two stunning fountains seal it. The first is situated atop a platform surrounded by marble walls and accessible via long stairs with Japanese pagoda style entrance-ways on either side.

short video - link
Longer video in webpage link below
One reason Benjakiti is not as popular as Lumpini or even Chatuchak Park and Suan Rot Fai is that it’s a relatively recent addition to Bangkok’s growing number of green spaces. Opened in 2004 in honour of Queen Sirikit’s 72nd birthday, the park came to be when the Thai royal family decided to level a large swath of old buildings previously rented out to the Tobacco Monopoly. Benjakiti occupies 130 rai (some 21 hectares) and is part of a larger master plan to improve Bangkok’s overall livability.

Between this Japanese pagoda fountain and the lake is another, even more beautiful fountain that would be better described as a human-made waterfall. In a vast half-circle around a courtyard and shrine to the Queen, water flows gently over ridges in the sloped walls. With pink flowers on either side, this fountain feels like it belongs to a serious memorial. Contemporary Thai designers often lean towards the tacky, but this is one instance where elegance and grace were not overlooked.
The west side of the park includes a stretch of grassy slopes with several seating and activity areas shaded by low-hanging palms. A couple of small playgrounds, a skateboard/freestyle bicycle ramp, meditation area and basic exercise equipment can all be found here. Benjakiti lacks the energetic fitness groups that dance to thumping techno in Lumpini every evening, and the overall atmosphere is quiet and not-at-all crowded. Lumpini is great for people-watching, but if you need a respite from the crowds and noise, Benjakiti is the place to be. 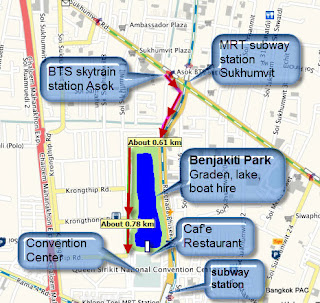 The park’s centerpiece is a relatively large lake (for Bangkok at least) surrounded on all sides by well-groomed flower bushes and trees. Go for a cruise on a pedal-powered swan boat, or just enjoy the photogenic reflections of surrounding skyscrapers.
With a small lake rimmed by abundant flowers and some of the most attractive fountains in Southeast Asia, Benjakiti Park is arguably Bangkok’s prettiest green space. Though Lumpini Park is far more popular, Benjakiti also offers a range of activities and, in particular, has become a cycling haven in the often gridlocked city. Above all, this isthe place in central Bangkok to enjoy peace and quiet or a romantic sunset stroll.