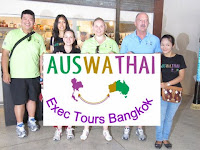 
A combination of Team Building, "Sharpen the Saw", lavish lifestyle and a good dose of kinship and hospitality Rejuvenation that "Thailand does like no other". "There can be but only one"

Eeryone was so unhappy (that the tour ended) we will have to do it again!
The concept is K.I.S.S. - knowing the state of play for W.A. Biz (legacy of our mining boom) we offer an antidote.

Editorial by Dr. Kenneth Yap, Assistant Professor of Marketing
UWA Business School
University of Western Australia.
http://www.uwa.edu.au/people/Kenneth.Yap
I was a participant in a tour organised by “Aussie Exec Tours Bangkok”. The tour comprised Australian business executives (male and female) and commenced on the 28th of November, 2010 with a return-trip from Perth to Bangkok.
The concept of this tour revolved extensively around the objectives of team building, hospitality rejuvenation, business networking and cultural exchange. 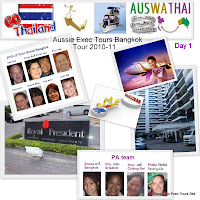 I found this tour concept to be cutting-edge, where participants gained an immensely greater appreciation of interpersonal skills and group dynamics resulting from team building activities. This helped to build better rapport within the organisation.
I observed that not only did the executives find fresh perspectives about their colleagues, but they also rejuvenated their impression of the wholesome hospitality that is unique to Thailand and Thai culture. The tour host also offered introductions to trade links, thus creating a platform for import/export opportunities.
The integration of local Thai Personal Assistants (P.A.) into the team was a significant factor in localising the experience.

The P.A. helped immersed executives in the culture by providing local knowledge, translation and orientation services. All of us enjoyed a seamless cultural bond as the P.A. participated in all team events including team building activities.
Certainly for me, this served to enrich the unique experience of cultural exchange and extended friendships. I enjoyed my visit to Bangkok thoroughly because the P.A. made the tour seamless and memorable. I look forward to my next trip to Bangkok, hopefully with my group of International Marketing students.
On a related note, I was asked to attest the skills set of Arwee Manigluck, to assist with her Visa application to visit W.A. to help promote this unique concept. Apparently the visa officer claims her fluency in English Thai-English translation ability is doubtful.
To this end, I have no hesitation in providing both my assessment and recommendation of her competency and skills set. Arwee’s fluency in English is well above-average and more than sufficient to perform her role in Perth. In my seven-day executive tour of Thailand, I had no difficulty in conversing with her. She was very capable in communicating and interacting with all participants of the tour group. 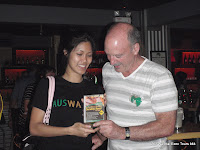 Picture left
Arwee receiving a token award from Tour Guest Noel carter, Director of W.A.T.C. (West Australia Turf Club).
In several circumstances, Arwee demonstrated significant maturity and problem-solving skills. This was most obvious during the occasional logistical hiccups, which would be expected of a pilot tour. These skills set enabled her to perform effectively in her role of Tour Manager, Translator, and Liaisons Officer.
Promo video Image via Wikipedia“My life is really relaxed,” he said Thursday. “I have lots of people coming to see me.” On Thursday, that included his Canadian lawyer, Bob Amsterdam, as well as a delegation from Thailand, which remains a country of deep political divisions heading into an election year.
Life in self-imposed exile is pleasantly laid back and far from lonely, says Thaksin Shinawatra, Thailand’s deposed prime minister, who remains a hero to many in that country’s “Red Shirt” movement.
The 61-year-old former leader has kept a low profile since being ousted in a military coup Sept. 19, 2006, but spoke to the Toronto Star in an exclusive interview from his Mideast exile.
It endured its worst violence in recent memory last spring when Thaksin’s red-shirted supporters poured into the streets of Bangkok to demand elections and protest the government of Prime Minister Abhisit Vejjajiva and stayed there for almost two months.


Clashes with the Thai military left 91 dead and an estimated 1,800 wounded and led to eight months of emergency rule.

Image via WikipediaThaksin, meanwhile, has been living a peripatetic life since 2008, when he failed to return to Thailand from the Beijing Olympics, after a Thai court had convicted him on corruption charges and sentenced him in absentia to two years in jail.
Reports from Bangkok last week said a group of Pheu Thai party members were travelling to meet with Thaksin and discuss who should assume the opposition party’s leadership.
Thaksin, a former billionaire businessman, distanced himself Thursday from direct involvement in any political movement.

He insisted he is not advising members of the United Front for Democracy Against Dictatorship (UDD), the formal name for the Red Shirts, who enjoy wide support among Thailand’s rural poor and working class. “I don’t know them,” he said.

Image via WikipediaBut Thaksin also said Abhisit’s conservative coalition government, largely supported by Thailand’s wealthier urban population, must sit down with UDD leaders to discuss their concerns.
The British-born Abhisit promised a reconciliation process last May.   “Reconciliation would mean that you have to talk,” Thaksin said. “And find a solution to bring democracy back. Reconciliation does not mean you get rid of leaders and bring their followers to jail.”   The UDD, meanwhile, is putting the finishing touches on a complaint it plans to file this month with the International Criminal Court, urging that the Thai government be indicted for crimes against humanity in connection with last spring’s deadly demonstrations. Image via WikipediaThaksin is not among the complainants but is contributing to the UDD’s legal expenses, Amsterdam said Thursday.  Thaksin’s own human rights record, meanwhile, has been called into question by Amnesty International.
The agency has asked for independent investigations into the deaths of more than 80 people killed when his security forces tried to suppress suspected insurgents in southern Thailand in 2004, and another 2,500 killed in a crackdown on suspected drug traffickers.  But his popularity remains high in the countryside because of policies that included micro-lending programs, erasing farmers’ debts and a form of universal health care.  “Their life has been changed.

Image by AlicePopkorn via FlickrTheir happiness has been taken away,” Thaksin, who won two elections, said Thursday. “They just want me back.” His convictions and jail sentence were “really, really politically motivated” by the “military junta government” and his opponents, Thaksin added.
“They really planned to lock me out of Thailand and don’t want me to go back.” The challenge for any leader is bridging the enormous economic and political gulf between rural Thais and the Bangkok elite, said Peter Vandergeest, who teaches at York University’s Centre for Asian Research. Thaksin agrees.
“Thais are really peaceful,” he said. “They have to have a solution so that the people of Thailand can live together and no division.” Image via WikipediaBANGKOK: -- New company registrations are expected to grow by more than 22 per cent this year on an influx of investment to Asia, especially to Asean, amid slow economic growth in the United States and the euro zone.


The Business Development Department yesterday reported that new registered companies grew sharply by 23 per cent from 2009 to 50,776 firms last year, the highest in 99 years. Combined investment capital rose 20 per cent to Bt263.82 billion.

The investment capital for existing firms also increased sharply last year, by 37 per cent to Bt603 billion, while the number of businesses shutting down operations dropped by 6 per cent to 16,004. Image via Wikipedia
He said new company registrations should increase continuously this year on strong economic expansion. Investments from South Korea, Japan and China will benefit Thailand and other Asean countries, as the region has high potential to serve as a centre of manufacturing and trading.
Other factors that contributed to the growth of new businesses last year included recovering investment in the stock market, strong export growth, the government's investment under the Thai Khem Khaeng Project, and an increase in foreign direct investment.

However, six negative factors will affect new-business expansion this year, including a stronger baht, high interest rates, political uncertainty and the lead-up to the general election, the fragile global economy, higher inflation, and an increasing oil price.

Alongkorn said those factors would affect all business transactions, capital investment, and the establishment of new companies, as well as the collapse of others.

In December alone, new registered businesses rose 26 per cent to 3,112 companies with an initial investment worth Bt11.18 billion.